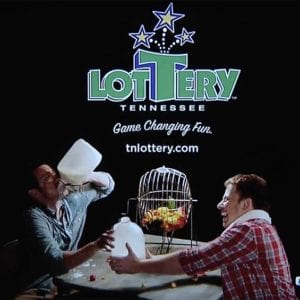 The Super Bowl commercial I shot for the TN Lottery ends with me practically drowning myself in milk while my good friend, Chris Killian, happily watches. It’s a great ending to the commercial and director Wes Edwards captured it beautifully, just as he always does. I was thrilled when they asked if I’d be willing to do the milk gag. There isn’t much I won’t do for a laugh, it sounded like a fun idea, and I wasn’t wearing my own clothes anyway.

Now, film studios are big open spaces and for one reason or another they are typically very cold. So, it goes without saying that pouring two gallons of cold milk all over myself in a cold studio was quite the eyeopener. We got the shot and thankfully, production had the foresight to make that the last shot of the day. Hair and makeup was quick to offer towels and point me in the direction of a shower if I wanted one. I blame the shock of the cold and the adrenaline of finishing a successful shoot but for some stupid reason I passed on the offer of a shower, toweled off, changed back into my clothes, said my goodbyes and headed out the door.

I hopped into my classic car that has no air-conditioner with a thin film of dried milk all over my body and set off into Nashville rush hour during the hottest part of summer. I’m no scientist but I believe that when milk meets two and a half hours of 90 degree heat, bad things happen. For the next week my car smelled like a high school locker room filled with hot donkey farts. I don’t regret pouring the milk all over myself one bit. I love that commercial and am proud of the way it turned out but if I had it to do all over again…I’d definitely take the shower.