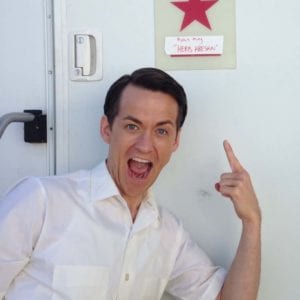 People have a distorted view of what being an actor means. To most people, actors are famous, wealthy socialites that spend their time on red carpets and vacationing in the Hamptons. Acting is a special job reserved for special people and any creative mudblood that dares to go down that path had better have a “Plan B” if they don’t want to starve to death. Whenever someone I’ve just met finds out that I’m an actor they always try to figure out whether or not acting is just a hobby for me. Questions like, “You mean in community theater?” or “So you’re trying to become an actor?” are common. Over time I’ve been lucky enough to work on projects that people recognize which only leads to the second round of questioning. “So, who is the most famous person you’ve worked with?”

I don’t blame people for wondering and to be honest, working with famous people does add a certain level of clout to an actors career in and outside of the entertainment community. It makes sense and I can’t tell you how relieved I was once I could respond with some names that people actually recognized. I’ve shared the screen with household stars including some personal heroes throughout the years. Even tales of narrowly missing Mel Gibson or Cedric the Entertainer while on set seem to be enough to satisfy people’s curiosity about where I stand.

The odd thing about it is that no other occupation I’m aware of is held to this same weird standard. If I were an accountant nobody would ask, “You mean an accountant for some small local startup?” or “So you’re trying to become an accountant?”. Nobody asks an accountant who their most famous client to date has been and no accountant has ever been told to have a “Plan B.” As a professional actor I can tell you, that although notoriety makes the path easier, an easy path is never what I sought out to find and the further I go the harder the path has become. My “Plan A” was to be a musician, “Plan B” was to become a standup comedian and “Plan C” is currently acting along with screenwriting and teaching improv comedy. That doesn’t mean that I failed at being a musician or comedian. Instead, it means that my focus shifted when life threw curveballs my way. It means that when I arrived at a door that wouldn’t open, I stepped through the other door that would. It means that I have chosen paths that would allow me to continue entertaining people in a way that enables me to make a living because that is what makes me feel like I am fulfilling my purpose.

Acting is no longer just a dream for me. It’s a job. A means to an end. Perhaps that end will come in the form of fame but it could also come in the form of me having to hustle until the day I die. That thought pushes me everyday to build longer lasting relationships, to find consistency in my field and more than anything to simply keep pushing in a career that I am completely in love with. My worst day as an actor is still better than my best day in the corporate world ever was. The bottom line is that a career in accounting would be reliable but it just isn’t what I’m made to do. I don’t know if the next five or ten years will bring fame. I have friends that have become famous and I have friends that undoubtedly should be. What I know is that I will still be on this crazy path wherever it takes me, because I’m not seeking fame. I’m just seeking the next step.